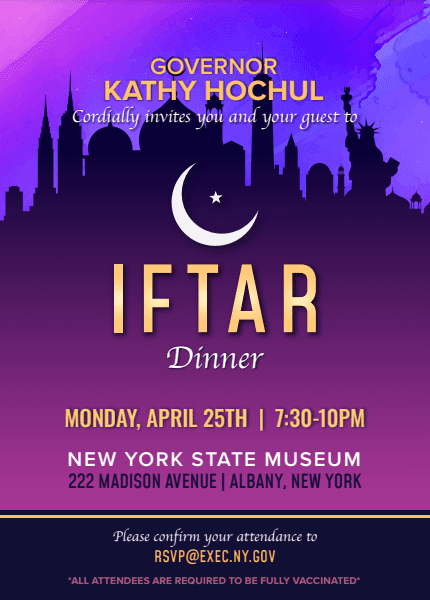 Introduction and Recognition in New York State Assembly
Prior to the Dinner, Assemblyman Sayegh introduced the interfaith and peace delegation on the floor of the New York State Assembly. Here is the video of this presentation, and welcome from House Speaker Pro Tempore, Hon Jeffrion L. Aubrey and Assembly delegates.
Here are images from the Statehouse and this introduction. In one of the pictures on the house floor, is Assemblyman David I. Weprin Assembly District 24
IMG_5610
IMG_9973
IMG_5611
IMG_9980
IMG_5581
IMG_5582
IMG_5585
IMG_5575
IMG_5584
IMG_5612
IMG_5580
IMG_5578
IMG_5615
Iftar Dinner
After introductions to the Assembly, our same delegation moved across the concourse to Governor Hochul‘s invitational Iftar dinner. Imam Shamsi Ali called the Azan (the call to prayer to conclude the day’s fast), after which all gathered for Maghrib prayer (sunset prayer). The meal was abundant and appreciated. After some time, educator Debbie al Montasser offered thoughts and commentary. Imam Mansoor Omar expressed gratitude on behalf of the community and introduced Governor Hochul to offer a keynote for the evening. The Governor spoke for several minutes on the importance of the day, and in praise and gratitude for the contribution to New York, and to American culture by Muslim Americans. The governor made efforts to visit and greet each table once the program formally concluded.
Here are some pictures from the Iftar dinner. The religious delegation was joined in the dinner by author and professional therapist Dr. Mark Hillman
IMG_5613
IMG_5617
Attachment-1
IMG_5614
IMG_5593