Twelve Gates Foundation is fortunate for the generosity of Columbia University, Professor Jack Hawley of NYC, who worked closely and patiently with us past the tech difficulties to bring to us his wisdom on Religion in India, and unique environmental challenges that call urgently for our care and creative response.

This important and timely interview with Professor Hawley, (Claire Tow Professor of Religion at Barnard College, Columbia University) delves into the intersection between religious and political life in India, and how these impact the environment, and the health of its sacred rivers and beyond.

This interview here just below is a must listen for both specialists and new learners alike.

Read more about Professor Hawley, and his life and distinguished work here:

Is the Claire Tow Professor of Religion, at Barnard University, his professional home since 1986

Professor Hawley’s research is focused on the religious life and literature of north India, particularly that of the last 500 years.

Jack Hawley has served as director of Columbia University’s South Asia Institute and has received multiple awards from the National Endowment for the Humanities, the Smithsonian, and the American Institute of Indian Studies. He has also been a Guggenheim Fellow, and was recently elected to the American Academy of Arts and Sciences. In 2016-17 he was a Fulbright-Nehru Fellow principally resident in Vrindavan, not far from Delhi.

Professor Hawley is the author or editor of more than twenty-five books, most treating concerns related to Hinduism and the religions of India. Recent publications include A STORM OF SONGS: INDIA AND THE IDEA OF THE BHAKTI MOVEMENT and, with Kenneth E. Bryant, SUR’S OCEAN: POEMS FROM THE EARLY TRADITION (both Harvard University Press, 2015). Each won an award from the Association for Asian Studies. His most recent publication is KRISHNA’S PLAYGROUND: VRINDAVAN IN THE 21ST CENTURY from Oxford University. 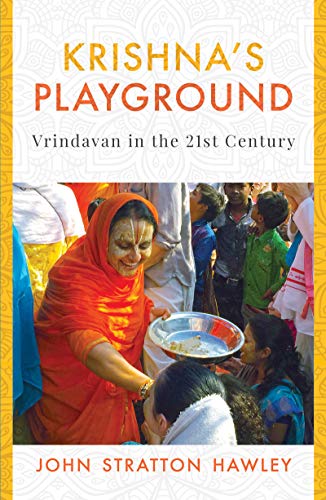 This is a book about a deeply beloved place—many call it the spiritual capital of India. Located at a dramatic bend in the River Yamuna, a hundred miles from the center of Delhi, Vrindavan is the spot where the god Krishna is believed to have spent his childhood and youth. For Hindus it has always stood for youth writ large—a realm of love and beauty that enables one to retreat from the weight and harshness of the world. Now, though, the world is gobbling up Vrindavan…