Living Harmoniously in an Interfaith World, A Muslim Contribution

On February 4, 2020, Twelve Gates Foundation, together with The Rumi Forum, the GW Interfaith Council (at George Washington University), and the United Nations Association, National Capital Area (UNA-NCA), convened the public meeting “Living Harmoniously in an Interfaith World, A Muslim Contribution,” at the Churchill Center in the Gelman Library on the GWU campus in downtown Washington, DC. 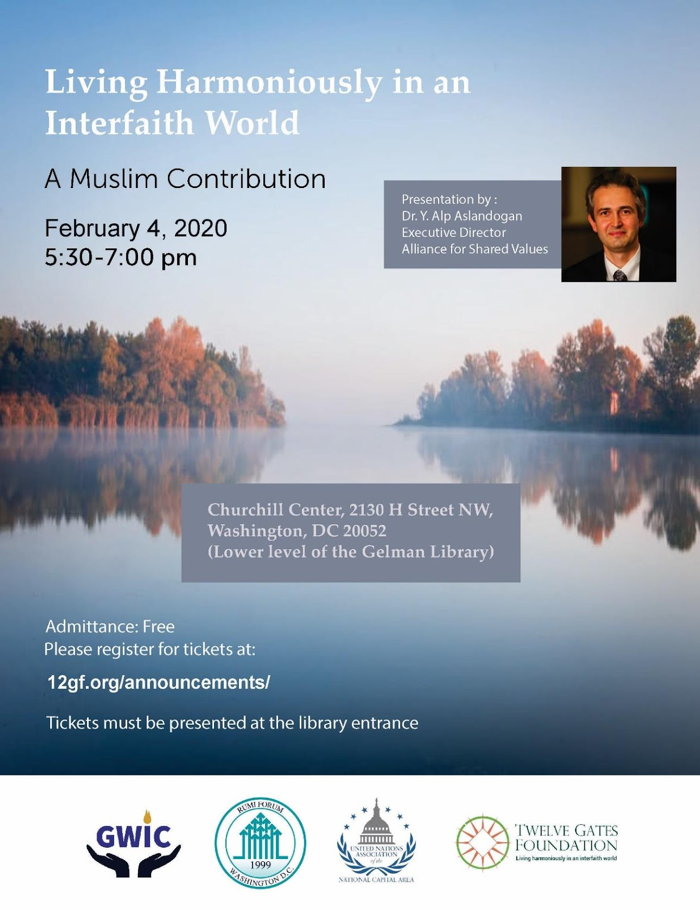 Twelve Gates Foundation exists to pioneer next-phase interfaith activism, moving the near 50 year old, world movement past its current standstill. This development is rooted in a clear telos for the work, including tasks for activists, and a structure and organization for activities that results in genuine, measurable progress. Religions involved identify and promulgate elements from within their respective traditions that create believers who naturally live harmoniously in our present interfaith world.

Twelve Gates calls upon and provides opportunities for leaders and believers in each and all religions to take up this work in earnest, internally within their own faith communities, and by supporting one another as partners across sectarian lines.

At the February 4th meeting, participants learned of Muslim resources and activity for this work. Jaiya Lalla, President of the George Washington Interfaith Council (GWIC) welcomed guests and spoke about the importance of interfaith, in particular as a force for good in international relations. Paula Boland, executive director of the United Nations Association, National Capital Area (UNA-NCA), introduced the work of UNA and explained the interest of UN Secretary General António Guterres in peace-building, recognizing the importance of interfaith in this process.

Thomas Cromwell, a Twelve Gates board member, introduced the organization, its philosophy and approach to interfaith, drawing on his personal experience (especially during 25 years in the Middle East) to demonstrate the need for interfaith to go beyond its current level in leading the way in the creation of a world in which faith is a universal force for enduring peace, rather than a sectarian party to political and other conflicts.

Ibrahim Anli, Executive Director of the Rumi Forum in Washington D.C. introduced their activities, and introduced Dr. Y. Alp Aslandogan, the Executive Director of a sister organization, the Alliance for Shared Values. Dr. Aslandogan spoke on Muslim scriptural and historical traditions and teachings that can guide and bolster personal growth and self development in efforts to live harmoniously in an interfaith world. He also spoke on the international work of the Hizmet (Service) movement which started in Turkey, explaining how it embodies a Muslim faith of self-development and giving to others.

Video of the presentations are preserved here, and make for interesting, educational and edifying study.

Several in attendance were deeply moved by their experience, including an Iranian Doctor of Psychology, who wrote:

Last night was like a response for me… like I had called and had been calling and then all these wonderful people were like angels appearing.

Now I have to listen to the call and respond… What is my calling in the world now, what am I to do with love through light in the world. I ask the universe to use me and my God given gifts in the best way possible.

Like you said yes, how important it is for people to be moved by God… and indeed, like you said it is individuals moved by goodness and love that make a difference. All of this and the mission and vision of Twelve Gates Foundation certainly do speak to my heart.

It is as if I have been preparing all my life for this….

She was not alone. Many similar comments were submitted to the organizers following the program.

The four co-sponsors and partners of the event all gave honestly and truly. Preparation work was genuinely shared. Promotion of the event was carried out by all the partners, multiplying the impact, and the real work of putting the event on was substantially shared by several volunteers. The GW Interfaith Council provided the space and the Rumi Forum provided delicious Turkish food. Twelve Gates produced the flier and managed the registration for guests.

The Feb. 4 event, and a GW Interfaith Council job fair the day before provided an opportunity for Twelve Gates to be introduced to some key organizations:

The success of the meeting was due to humble and faithful efforts by many who are due special thanks. Some of these include: