I received this first hand account of the Beirut blast from beloved, long time personal friends, who have lived for decades in Beirut. At my request they allow me to share this with you

Please read their account below. It is elegant and meaningful
Thank you 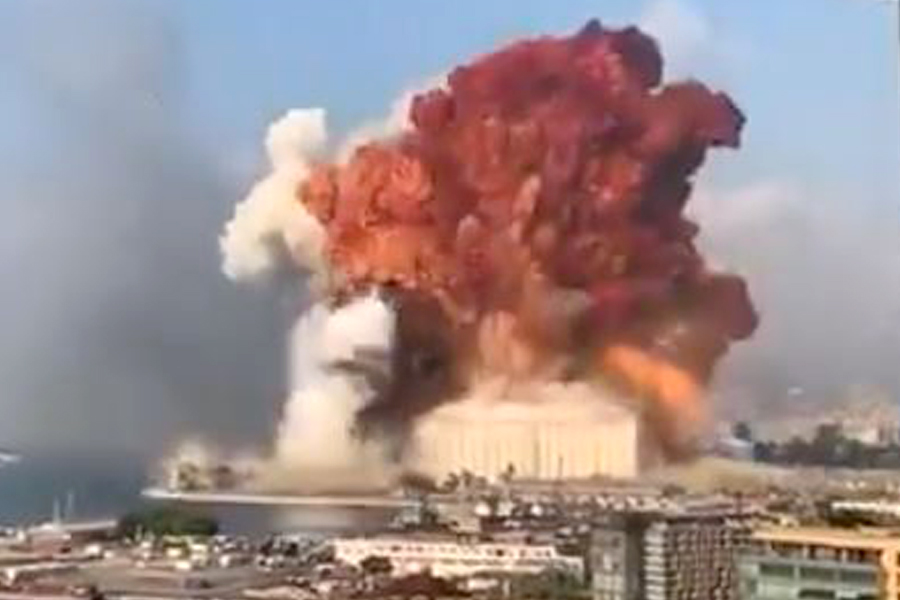 This Sunday morning around 10am, there is an aggressive knock on our door. After opening it with difficulty (the door was damaged in the August 4 Beirut port explosion along with our entire apartment), I see an army officer and a soldier standing on the landing. They are bringing us a sizable box of food aid, because we are living in the area hit by the catastrophe.

This surprise visit gives me a moment of reflection on the shocking and hopeful moments of the past two weeks.

The first reflection is one of shock and surprise. When the explosion hit our building with a wave of pressures that has been compared to the largest man-made bomb blasts in history, my wife and I were sitting near windows. But the glass flew by us. I felt myself operating on the automatic of my physical self in the next few minutes. My cognition was not in a position to understand what happened. There was earth in my hair, glass and wood fragments from our windows all around me and I found a small scratch on my knee. There was an even smaller scratch on my right cheek - as I only discovered days later when my daughter Natascha asked me about it.

So in the first hours after, I looked around our apartment and my first wonderment was that some things were not destroyed and not tossed about - and that some corners remained virtually untouched. What I saw was that these untouched areas included our prayer corner with the pictures and all the items in it. Also not damaged were our marriage Blessing pictures on my wife's desk and other spiritually meaningful pictures in our apartment, even those framed and behind glass.

The more time has been passing, the more entrenched is my astonishment about us having emerged from this disaster with so many blessings and symbols of blessings intact. In the Hospital St George - which is just across the street from us - 13 people, including nurses and patients - were killed and many more injured by breaking of windows.

The second reflection is on the people we have met in the aftermath of the catastrophe. From the night of the disaster, we witnessed the solidarity of the people, beginning with neighbors who came to check if we are unharmed. From the day after the explosion, young Lebanese volunteers rushed to help the families in our area. After two days, dozens and hundreds of young helpers were in our street and on our doorstep. The first team to come were Muslim scouts organized by the municipality of Beirut. The next team were five self-organized university students who had come to our building from an area 70 km to the north. They cleared out big chunks of debris from our son's room. Then two other volunteer carpenters fixed our door so that we could close it again. All of that happened between Wednesday Aug 5 and Saturday Aug 8.

Over the next few days, our electricity and water supply were restored. I found lost items in our apartment. Anxieties receded. Also in this second week after, the support from our children, who both had been calling us immediately and on every day after the disaster, widened into expressions of concern, care, and financial help from international friends and community.

As Lebanon already before this disaster had been severely deteriorating in its economy, I have for more than 8 months been hearing expectations of growing poverty and correlated crime rates for the country. I found it always difficult, however, to see this aspect overemphasized by some economists, civil activists and media. And in the past two weeks, I again see that some people are feeling pushed into theft, looting, vandalism and robbery. But I see much greater expressions of good will, altruism, volunteerism, compassion and solidarity among the people in Lebanon and also see support coming from good people all over the world. This shows me the balance of hope for humanity.

My third reflection is emotional and spiritual. The catastrophe and its aftermath has served to reinforce in me a sense that had already been growing during the preceding months of economic and coronavirus crises in Lebanon: what is real and keeping me hoping and going forward, even if sometimes ever so slowly, is the presence of God and the presence of my wife, our children and family in our lives. In the days following the disaster, I found myself singing songs for my wife, gazing silently upon her beauty, and dancing with her in the room where she had just cleaned the floor from broken glass. So in this experience, my testimony and experience is that the worst disasters show us the greatest values in our lives. These values and valuables arise from the love of God, from mutual hope and love, and from holding onto each other as second selves of God.