The Twelve Gates international advisory board is composed of men and women committed to building a world of peace through interreligious dialogue, reconciliation and collaboration. Please contact Dr. Frank Kaufmann at fkaufmann@12gf.org regarding recommendations for this board. 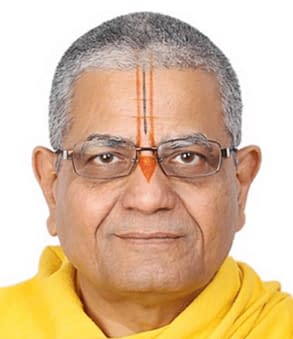 Acharya Shrivatsa Goswami comes from the family of eminent scholars and spiritual leaders at Sri Radharamana Mandir of Vrindavan. He is a leading figure in the Vaishnava tradition. He has participated in conferences on philosophy and culture and lectured at major universities around the world, including as a visiting scholar at Harvard and Heidelberg. His book Celebrating Krishna was received with much acclaim. He is Director of the Vraja Prakalpa, a multi-disciplinary research project that has already published eight volumes on various facets of Vraja culture and history.

Among other commitments, Goswamijiis devoted to Inter-faith relations worldwide and is presently working on the alliance of religion and conservation. He is connected with several important international peace and environmental movements.He was invited by the Archbishop of Canterbury and the President of the World Bank to represent Hinduism at a historic meeting of world religions at Lambeth Palace, London. In 2007 he was a resource person for religion to the meeting of over 40 heads of state in Vienna. In 2009he was invited as a Plenary Speaker at the Centenary Celebrations of the American Academy of Religions. In 2011 the Pope invited him to the Vatican. In 2012 he was one of the main speakersat the Interreligious Harmony Week function at the UN General Assembly.

The President of India awarded him the Sangit Natak Akademi lifetime award for overall scholarship and service to Indian culture.

Darrol is a Distinguished Professor Emeritus and the Director of the Centre for Dialogue and Spirituality in the World Religions at Renison University College, Waterloo, Ontario, Canada. Educated at Concordia College, Harvard Divinity School and the University of St. Michael’s College (Toronto), he has edited/authored more than 30 volumes including A World Broken by Unshared Bread, Religion in a New Key 3rd ed, Inter-Religious Dialogue: Voices from a New Frontier, Muslim Christian Dialogue, Ways of the Spirit: Celebrating Dialogue, Diversity & Spirituality, Ways of the Spirit: Voices of Women, and most recently, Out of Galilee: Christian Thought as a Great Conversation.

He has been involved in interfaith dialogue since the mid-1970s. Sabbaticals with his family in India transformed his approach to the religious pathways of Hinduism, Islam, Tibetan Buddhism, Sikh and Jain traditions, as did time in China alter his approach to Confucian, Daoist and Buddhist Ways. The dialogue of the intercultural and interreligious world remains his passion. He received the Huston Smith Interfaith Educator award in 2007.

Dr. Charles Selengut, a professor of sociology at County College of Morris since 1970, earned his PhD with highest honors from Drew University. He is known internationally for his expertise in the sociological, psychological and political dimensions of religious fundamentalism. His works include books, articles and monographs on Muslim, Jewish and Christian fundamentalism and their significance in international relations. He is the author of Sacred Fury: Understanding Religious Violence, Jewish-Muslim Encounters: History, Philosophy and Culture, and other significant work in the area.

He was a member of the University of Chicago “Project on Fundamentalism,” a National Endowment for the Humanities fellow at Harvard University, and a 1997 finalist for the Carnegie Professor of the year award.

Reverend Junsei Terasawa became a Buddhist monk at a young age, and thereafter spent six years in India intensively studying and practicing Buddhism, and involving himself in the social reform movement to end conflicts caused by communal and caste divisions. Later he contributed to the anti-nuclear peace marches and demonstrations throughout Europe, and established two Peace Pagodas in England.

In India, he initiated the Rajgir Symposium on the Victory of Law over the nuclear menace, producing the visionary “New Delhi Declaration to build a Nuclear-free Non-violent World.” He initiated the Peace Camp on the Iraq-Saudi border in a bid to avert the Gulf War, and more recently the three-month Pakistan-India Prayer March for Peace.

Reverend Terasawa represented the International Peace Bureau in annual sessions of the UN Human Rights Commission in Geneva, and initiated the Inter-Faith Peace Mission to Chechnya, with the support of Prince Hassan of Jordan and Mikhail Gorbachev. He invested greatly in an effort to resolve the Iraqi crisis through his initiation of the International Inter-Religious Peace Mission to Iraq.

Dr. Craig Considine is a scholar, professor, global speaker, media contributor, & public intellectual based at the Department of Sociology at Rice University. Dr. Considine's opinions have been featured in the New York Times, Washington Post, CNN, BBC, CBS News, Fox News, MSNBC, Newsweek, & Al Jazeera. He has been invited to speak at some of the leading international organizations & universities in the world. He holds a PhD from Trinity College (University of Dublin), MSc from Royal Holloway (University of London), & BA from American University in Washington, DC. Dr. Considine serves the mission to improve Christian - Muslim relations conscientiously and sacrificially.

During his studies in Islamabad, Imam Ali was hired as a muezzin in Faisal Mosque, the biggest mosque in the city.

In 1996 in New York City, Imam Ali served the Indonesian community mosque in Long Island City, Queens. In 2001, he was appointed as deputy Imam of Islamic Cultural Center of New York, the city’s largest mosque located in 96th street and 3rd Ave in Manhattan.

A few days after the events of 11 September 2001, Imam Ali was chosen by New York City to represent the Muslim community to visit the scene. He recited a prayer at the memorial service for the September 11th victims at Yankee stadium in the Bronx.

In 2006 Ali was chosen as one of the seven most influential religious leaders in New York City by New York Magazine. He represented the Muslim community at an interfaith discussion on Religions and Sustainable Development in the White House 2007, and took part in the Transatlantic Interfaith Dialogue in Frankfurt, Germany 2008. In 2008 Ali received the ICLI Interfaith Award.

Shamsi Ali is Chairman of the Board of Trustees for the ASEAN Muslim Federation of North America. He is Vice President of the Asian-American Coalition USA (AAC-USA) and its UN Representative. Ali is Advisory Board member to numerous interfaith organizations, including the Tanenbaum Center and Federation for Middle East Peace. Imam Ali is Board member for the Partnership of Faith in NY, and co-founder of the UNCC (Universal Clergy Coalition-International). He is Assistant Director and Board member of the Muslim Foundation of America, Inc. Imam Ali is Chairman of the annual Muslim Day Parade in NYC.

Solala Towler was editor and publisher of the spiritual and scholarly journal The Empty Vessel: The Journal of Daoist Philosophy and Practice for 25 years.

He has had 14 books published, including Inner Chapters of Chuang Tzu,  The Tao of Intimacy and Ecstasy: The Promise of Spiritual Union,  Tales From the Tao (Watkins); and Practicing the Tao Te Ching: 81 Steps on the Way.

Mr. Towler’s work has been translated into Dutch, French, Italian and Spanish. He is a founding board member of the National Qigong Association as well as its past President.  Mr. Towler has taught qigong and Daoist meditation for over 30 years, and leads tours to visit Daoist temples in the sacred mountains of China.

Solala also leads Daoist Tea Ceremonies and is author of the books Cha Dao: The Way of Tea: Tea As a Way of Life and Tea Mind Tea Heart.

As a musician, Solala has recorded four cds of meditation/relaxation music. He does this using large Tibetan Bowls, flutes, harmonic overtone singing and group chant.

To learn more about Solala and his work visit www.abodetao.com.